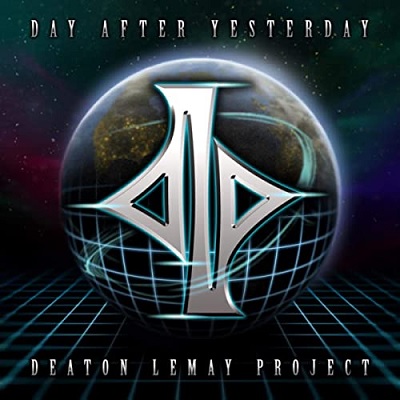 Prolusion.
US project DEATON LEMAY PROJECT is spearheaded by composers and musicians Roby Deaton and Craig LeMay. Just how long this creative duo has been collaborating isn't exactly stated anywhere, but as I've seen phrases about a project 25 years in the making somewhere I presume the ideas for this venture has been ongoing for some time. DLP self-released their debut album "Day After Yesterday" towards the tail end of 2019.

Analysis.
From just about the first second that this album starts playing, I suspect the greater majority of progressive rock fans will conclude that aye, we are in for a symphonic progressive rock album this time around. It is the manner in which the keyboards are introduced that makes this something of an automatic association, and it pretty much sticks until the very end too.

The dramatic, bombastic and at times rather expressive keyboard patterns, arrangements and motifs that is the defining aspect of this album is of a kind that for me at least comes with a distinct association towards one musician in particular, namely Keith Emerson. Traces of other tangent players may well be identified throughout this production, but for me this album strikes me as a massive homage to the late and great Emerson more than anything else.

The songs themselves aren't quite in the ELP mold however. By styarters the keyboards are contrasted with the electric guitar in most parts of the album, and also alternates with the guitar in being given dominant spots as well as solo runs. The compositions are also a bit easier on the ear and the mind than what I associate with ELP: Less expressive, less flamboyant, and a bit more a part of a greater totality. Not to the point of being atmospheric and subservient though, although the keyboards are used in that role in some passages, but with what I'd describe as a generally more listener friendly approach, relatively speaking.

Apart from a couple of more careful cuts, which adds variation and some fine calmer moments for the listener, I'd say that by and large this album reminds me quite a bit of the best and most interesting parts of the ELP side project 3 from back in the 1980's. The 80's sounding keyboards will probably have a bit to say for this association, but the one song that came popping into my mind throughout this album is 'Desde La Vida'.

Plus points are handed out for the contributions of vocalist Hadi Kiani, who provides elegant and captivating vocals for the songs that aren't instrumental. A fine singer that elevates the songs where he contributes with his talent.
The at times retro-oriented keyboard sounds and a mix and production that isn't quite of the quality more established artists are able to strengthen their productions with are perhaps the main detrimental feature of this album, which gives this CD a sound that is more of the 1980's than the 2020's. The at times bombastic and expressive keyboard parts that dominate this album will also narrow down the target audience ever so slightly I presume. It is a distinct sound, and artists exploring a distinct sound will more often than not have a more defined fan base.

Conclusion.
Classic era symphonic progressive rock can come in many different guises, and in this case the most dominant aspect of the album are keyboard arrangements it's just about impossible to listen to without thinking of the late Keith Emerson. My impression is that this album as a whole has stronger similarities with the later ELP offshoot 3 than ELP itself, at least the more expressive parts of the sole studio album by 3 from the 1980's. That being said, I rather suspect that the majority of ELP fans will find it worthwhile to give this CD a spin as well.