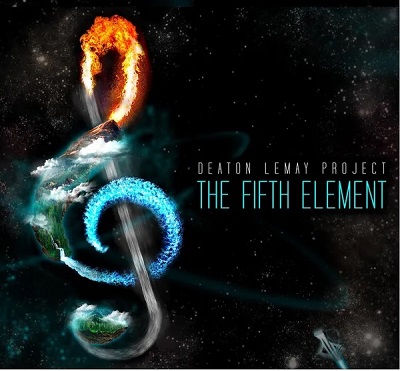 
Prolusion.
US band DEATON LEMAY PROJECT started out officially back in 2018, following a 25 year long period of gestation. They released their debut album "Day After Yesterday" in 2019, and following what I suspect has been a rather busy planning and recording period during the years of the pandemic the creative twosome of Deaton and Lemay are back with their second album "The Fifth Element" at the start of 2022.

Analysis.
While the fifth element apparently used to be defined as aether way back in the day, if the album name is inspired by this ancient science definition, the movie with the same name or some of the other fifth elements everyone can discover by hitting Google I do not know. Seeing the track list of the album I'd hazard a guess that music may be the fifth element referenced of course, but if that is the actual inspiration for the album name as well is a matter I do not actually know. What I am rather certain about however is that this is a band and an album I'd personally sort under symphonic progressive rock somewhere.

At the core of most of the compositions here are flowing and dramatic keyboard motifs and movements of the kind that comes with an automatic association towards progressive rock giants ELP. The overall scope of the compositions adds a few different dimensions however, with a generally more harmony oriented expression and tendencies towards AOR and on rare occasions classic hard rock being brought into the songs as well, the end result will often have the slightly more polished and smooth sound and expression that the trio 3 explored back in the day, a threesome also at times described as Emerson, Lake and Berry. While the latter of that trio have revived the original band name in recent years, Deaton Lemay Project creates music that in many cases sound like they have been made by the original 3 constellation back towards the end of the 1980's. As this is an album I really like myself, that is a description obviously meant as praise as well as a general description.

Some other elements is a part of the totality too of course, with vocal melodies and some motifs and arrangements that gives me associations to mid 80's Yes, some other details reminding me ever so slightly about Ambrosia on a few occasions and what may or may not be some very careful seasoning of Genesis and even Pink Floyd. All of these being very minor details though, at least as far as my perception is concerned, but subtle details that expands the landscapes explored in a very minor and very subtle manner. We are treated to a few left turns during the course of the album too, with the haunting folk-oriented 'Air' as perhaps the most prominent and distinct of these exceptions.

Conclusion.
Just as with the debut album by this US band, I will again conclude that it is a fine and well executed production that should gather a lot of interest from fans of symphonic progressive rock of the accessible variety, and perhaps primarily among those who treasured the album Emerson, Lake and Berry created as 3 back in the late 80's. Otherwise those with a taste for a retro-oriented variety of symphonic progressive rock with an accessible nature, sound and form should also take note of this band and this album.