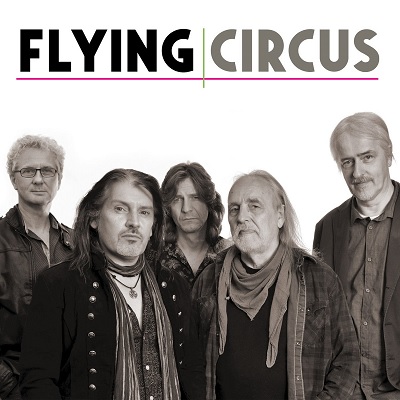 
Prolusion.
German band FLYING CIRCUS have been a feature in their homeland for a bit over 3 decades, with six full length albums to their name so far. In 2020 the band wanted to commemorate their 30 year long history by revisiting their earlier material, and the end result became the compilation album "Flying Circus", which was released through German label Fastball Music at the start of 2021.

Analysis.
As compilation albums aren't always the most inspiring production to release these days, Flying Circus decided to take a different approach to assembling this album than to merely pick fan favorites and the songs they treasure most themselves and deliver it as a ready made package. Instead they decided to re-record their older songs, remix and remaster most of the newer material, and then add on a new song to boot. While this may not mean all that much to those unaware of the band already it is a nice bonus feature for existing fans, which obviously makes this compilation album more inspiring for them to check out as well.

From what I can see this fine German band hasn't made all that much of a strong commercial impact so far, and judging from the material presented on this compilation album that is a bit of a shame. While it isn't exactly newsworthy that many quality bands never manage to get the impact they deserve, it is both disheartening and exciting to discover such artists. Especially ones that have been a going concern for more than 30 years.

The specialty of this band is to mix and blend elements from hard rock and progressive rock into tight packages, using structures and instrument elements from progressive rock and applying them in the more driving power of hard rock. Hence the rhythm section will be a bit more oriented towards momentum, while the other instruments will focus more on atmospheric moods, playful details and the more progressive elements of the music. That being said, the band do have sections with more expressive rhythm instrument details too. But the general approach is more or less as stated.

From the hard rock department it is clear that these guys know their Led Zeppelin as well as their Deep Purple, and from the progressive rock universe Kansas is the first name I noted down in the associations department. Quite a few of the songs strikes me as blending impulses from this trio of bands more than anything else. Some of the compositions will also feature world music elements by way of tonal details and the atmospheres explored, at times with a similar approach as what a band Led Zeppelin did on a song like 'Kashmir', on other occasions with a bit more of an emphasis on what for us here in the west will often be described as exotic instrument details. A few possibly jazz-tinged instrument details appear on occasion too, quite a few of the calmer songs has a bit more of an acoustic rock meets folk music vibe to them, and on one occasion they also dip their toes heavily into Gentle Giant oriented landscapes - on the song 'Cut It Deep'. And while this is more accidental, vocalist Dorp has a voice and uses it in a manner not all that far removed from a singer like Geddy Lee.

As this is a compilation album it probably isn't much of a surprise that the material here is solid through and through. This is the material chosen for representing Flying Circus at their very best after all, and for my sake at least I'm left with a very positive impression. Especially the opening handful of songs made a really strong impression, and moments of brilliancy and musical bliss pops up on a regular basis right through to the very end. A solid band with well developed material, and hopefully this compilation album will lead to more people getting to know about this veteran German band.

Conclusion.
Flying Circus is a band that have escaped my attention until now, which is a bit of a shame. The manner in which they blend aspects of progressive rock and 70's era hard rock is both charming and catchy, and the fact that the violin is at least as prominent as the keyboards in this context does give them a slightly different vibe than many other bands exploring similar landscapes. While they are not all that similar in style and sound, I do suspect that quite a few of those who treasure the exploits of a band like Magic Pie may find Flying Circus to be an interesting band to look into, alongside those who generally find bands combining aspects of hard rock and progressive rock to be interesting of course.

On Saturday the 24th of July Igor Savitch passed away, only a week after being admitted to the hospital due to feeling only slightly ill. It is one more tragedy that took place due to the Covid -19 pandemic, and a great loss for the music scene in Uzbekistan. For 35 years Igor led his band Flight 09 through tours at home and abroad, starting out when Uzbekistan was still a part of the Soviet Union back in 1986. The band's first six albums were released for the home market only, but in that initial phase the band also managed to tour abroad on multiple occasions in Holland and in the US. From 2002 and onward their next seven albums were made available internationally. The band had many plans going forward, and among those plans was the desire to return to the international tour scene. The loss of Igor is a great loss to his family and friends as well as his band members, but also a loss for the Uzbekistan music scene. A friendly and supporting artist, Igor Savitch was a good frien
Read more

(43:49; Iosis) Veteran Uzbekistan band FLIGHT 09 have been around in one form or another for a good 35 years at this point, and have been releasing material at a fairly steady pace ever since 1990. Their most recent album "10515" appeared towards the tail end of 2020, and was released through the Tashkent based label Iosis. In many cultures, 13 is regarded as an unlucky number, and if one were to be superstitious that would be a bad omen for this veteran band, as "10515" is their 13th studio album to date. In this case I rather suspect that any bad omens will be laid to rest though, as from what I have heard by this band so far, this most recent album of theirs is also their most interesting one by far. It would appear they have changed their line-up a bit since their last album appeared a couple of years back, and while I cannot trace detailed information about just how much I am reasonably sure that their current vocalist is a new one, and a singer that goes in gu
Read more

(41:58; The Foxholes) Track list: 1. Hex 2:02 2. Quarz 4:21 3. Elvira 3:20 4. Corey 12:35 5. Hexe 15:00 6. Escaparatismo I 4:40 Line-up: Jonah A Luke - guitars, programming Angel Millan - drums Max Morits - bass with: Javi Lopin - violin Maese 1001 - programming Societat Coral "El Vallès" - Choir Abel Sequera - drums Txosse Ruiz - guitars, bass Prolusion. Spanish band The Foxholes have a history that goes back to 2006, and from 2009 and onward they have been releasing new material at a fairly steady rate. "Hex" is the band's latest album, and was self released in the fall of 2021. Analysis. While I do not recall the specific details at this point, I do remember that the previous album by The Foxholes impressed me quite a bit, even if perhaps a bit open and expressive in form and function at times. While I do not recall where I placed that album in a progressive rock oriented context, this new album by them is a somewhat eclectic creation. That this is an instrum
Read more