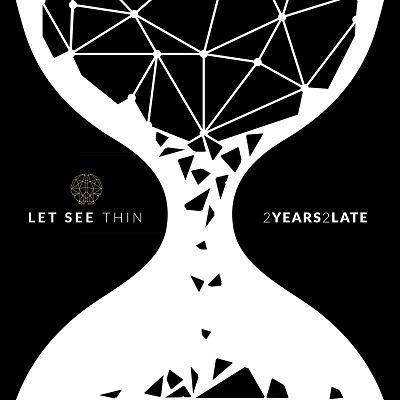 Prolusion.
Polish band LET SEE THIN was formed back in 2018, and released their debut album "2Years2Late" at the end of 2020. The band was subsequently signed to the label Progressive Ears, who reissued the album in early 2021.

Analysis.
Let See Thin is a band that in my view at least operates on the borders of the progressive rock universe, with at least a foot inside more conventional music. This is also fairly easygoing and accessible music, and an album I would assume would have a fairly good reach also outside of progressive rock circles.

Just about all of the songs here start out somewhere in the realm of pop/rock creations, fairly straightforward affairs, and for many songs I noted details that gave me associations towards genres such as new wave and post-punk. Others struck me as being more in a straight forward rock manner. Quite a few with arrangement details a bit more elaborate however, and most of the songs developed towards a more atmospheric laden neo-progressive expression in the final third or thereabout. A very accessible variety of the form though, closer to the 90's neo-progressive bands that operated on the boundary between that style and straight forward pop/rock music than to the more expansive bands in the genre.

Everything is really well made and executed however, and as an album experience this is a good one. The only slight negative of note is the accented vocals, where vocalist Woszczynski struggle with proper pronunciation at times.

Conclusion.
Let See Thin's debut album "2Years2Late" is a production that is distinctly pop/rock oriented as seen from a progressive rock point of view. It is a well made, easygoing and catchy affair, and comes with a recommendation to those who tends to enjoy bands that blend pop/rock elements with easygoing and accessible progressive rock.