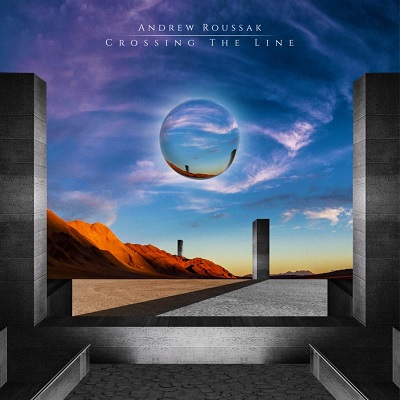 
Prolusion.
Based in Germany for a number of years, Russian born composer and musician Andrew ROUSSAK has been active as a solo artist since 2008, finding the time to create his own albums in between  various band projects he has been involved with. Four full length solo albums have been created by Roussak to date. "Crossing the Line" was released in the fall of 2021 through US label Melodic Revolution Records.

Analysis.
Roussak has an interest in many different types of music, and the compositions on this latest album of his showcase this versatility quite a bit. He also appears to have a strong affection for classic era progressive rock, which is also notable in just about all of the compositions at hand here.

What Roussak does really well is to use subtly different flavors of styles and related styles to create songs with a good flow, motion and contrast. He will pull in the compelling aspects from ambient music and combine them with the textures and layers from symphonic progressive rock to create alluring gentler landscapes, look towards artists such as ELP for moments filled with a more dramatic intensity, explore the time proven combination of organ and guitars in a progressive rock oriented manner as well as adding a bit of the flair and energy a band like Deep Purple applied to their material back in the day. The good, old piano is an instrument Roussak knows how to use very well, albeit a bit sparingly on this occasion, but especially on some of the more careful parts of this production the ebony and ivory is used to good effect indeed. Some of the songs here also feature what I'd describe as AOR-tinged passages, carefully expressive moments with something of a pop music sensibility if you like, on other occasions he'll step up the intricate details a bit more and land on a sound and style not too far removed from, say, Norwegian band Magic Pie.

Most of these aspects find their way into just about all of the songs on this album, with a couple of notable exceptions. One of these bing the concluding 'Suite En La Gavotte Et Six Doubles', a creation with stronger ties towards classical music and classic era progressive rock than the other songs here, and an epic length instrumental many fans of classic era progressive rock will find to be quite the tasteful piece of music indeed. Reading the album notes after taking my notes on the songs of this album, I see that this is actually a classical work, composed by Rameau and presumably rearranged as a progressive rock piece by Roussak himself.

Subjective taste will ultimately decide how interesting or not this album will be for the individual. For my sake I do find the instrumental compositions here to be the most interesting, and one of the reasons for that is that the vocals aren't quite at the same level of quality as the rest of this production. On some occasions the guitars struck me as just a little bit rough sounding, but that is again a matter of individual taste, and they certainly function well as a contrasting element that creates additional tension also on these occasions.

Conclusion.
Roussak's latest solo album is one that first and foremost should appeal to those with an interest in classical progressive rock, and then primarily among those with a fancy for the symphonic part of this particular universe.  That this album features elements and details from other styles of music should make this album a bit more accessible than others, and should presumably appeal well among fans of a band like Magic Pie. A fine piece of retro-oriented symphonic progressive rock.