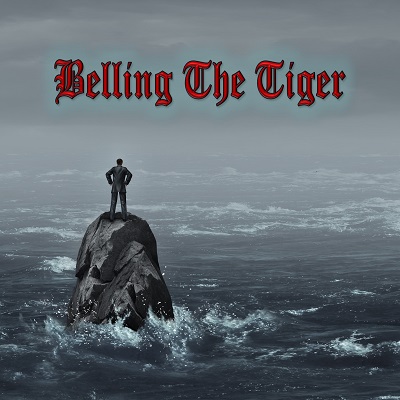 
Prolusion.
US band Belling the Tiger is one of those bands that suddenly just appeared with a ready made album and not revealing all that much of any previous history of the band. In this case the band appeared in 2021 with the album "Lost", released on presumed private label Barking Mad Records.

Analysis.
Belling the Tiger is one more of the bands that have chosen to explore a variety of progressive rock that should have a broader reach. Melodies and harmonies are at the forefront, the abrasive technical bits are kept to a minimum and subtle at that, but with ample space and room for haunting instrument solo passages and alluring contrasts. For me this band represents an accessible variety of progressive rock that doesn't really fit into any of the main subcategories, and in the old days I guess the classification for this album would simply have been art rock.

That being said, there are a few references to be specified here. One of the cornerstones of the band appears to be a more retro-oriented variety of hard or heavy progressive rock, with a darker guitar tone and bluesy, 70's feel as the dominating features. Another cornerstone comes pretty close to what I would describe as neo-progressive rock, with floating keyboard textures and subordinate guitar details as a prominent feature.

What makes this album hard to specify in terms of a specific subgenre placement is the additional features present. There is a subtle jazzrock undercurrent present in many of the songs, and acoustic rock segueing over to folk rock is another dimension that occasionally comes along. In one case with a distinct world music orientation as far as tones and timbres are concerned. In addition, what may or may not have been inclusion of post-rock elements appears in at least one song, and we have atmospheric laden elements present with something of an ambient vibe to them as well. So while everything is listener friendly and melodic, this isn't an album that is short on variety.

Where I do find this production to be if not lacking then at least having dimensions that may be a bit divisive is in the area of mix and production. I find the overall sound of the album to be a tad closed in and with what I'd describe as below average sounding quality. Another divisive aspect are the lead vocals: While melodic they are also expressive and very distinct, and as with all distinct vocals they will be something of an acquired taste.

Conclusion.
Belling the Tiger have made a promising debut album for sure, showcasing a versatile yet accessible approach to the art of creating progressive rock. While there are many good qualities to this album, for my sake I have the impression that the mix and production isn't quite at the level that is expected today, and that the lead vocals may not be as broadly appealing as the music as such. All in all, this is an album worth checking out by those who appreciate accessible progressive rock made with depth and variety.

On Saturday the 24th of July Igor Savitch passed away, only a week after being admitted to the hospital due to feeling only slightly ill. It is one more tragedy that took place due to the Covid -19 pandemic, and a great loss for the music scene in Uzbekistan. For 35 years Igor led his band Flight 09 through tours at home and abroad, starting out when Uzbekistan was still a part of the Soviet Union back in 1986. The band's first six albums were released for the home market only, but in that initial phase the band also managed to tour abroad on multiple occasions in Holland and in the US. From 2002 and onward their next seven albums were made available internationally. The band had many plans going forward, and among those plans was the desire to return to the international tour scene. The loss of Igor is a great loss to his family and friends as well as his band members, but also a loss for the Uzbekistan music scene. A friendly and supporting artist, Igor Savitch was a good frien
Read more

(68:03; SOE Records) Track list: 1. Overture 3:11 2. Round and Round 8:25 3. Air Dance, Part 1 0:36 4. Universe 7:50 5. Air Dance, Part 2 0:58 6. Darling 10:02 7. Air Dance, Part 3 1:22 8. No End 12:14 9. R-and-G Time 4:07 10. Wings of the Fast Lane 19:18 Line-up: Vitaly Popeloff - vocals, guitars Evgeniy Popelov - vocals, keyboards Al Khalmurzaev - vocals, bass Vladimir Badirov - drums, percussion Prolusion. Uzbekistan band Fromuz have been around for the better part of two decades at this point, but they have been fairly silent for around a decade or so now. But after a nine year long hiatus as a recording band they have a new album out. The album is called "The Asymmetric Rules", and is released on a label called SOE Records. Analysis. Fromuz is a band that I recall as more of an eclectic oriented unit that draws in impulses from many different aspects of progressive rock, and even after almost a decade of silence this is a quality the band still has a desire to explore. W
Read more