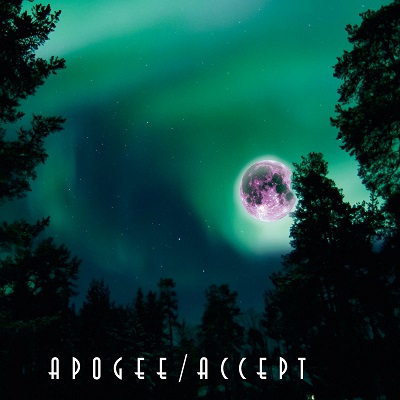 
Prolusion.
Japanese artist ACCEPT, not to be confused with the German metal band of the same name, have been exploring his particular variety of progressive rock since 2007 with seven studio albums to his name so far. "Apogee" is the most recent of these, and was released in the fall of 2021. One small detail of note is that this will be the final album composer and musician Hisao will release under the Accept artist name, as a certain German band after almost 15 years suddenly found out that they found it difficult to have a Japanese artist using the same moniker. Finding your way to this artist and his productions in the future will require you to search for Lua Azure.

Analysis.
This album is by and large fairly similar in scope and sound as the previous albums released under the Accept (JP) moniker previously, and while the album does venture out in a few different directions I'd still sort this one as a neo-progressive rock album more than anything else. Besides some direct compositions being fairly close to the core style, the atmospheric laden character of this as an album experience makes this a logical choice for me.

The songs themselves cover a few different landscapes. Besides a few longer creations with an 80's tinged variety of neo-progressive rock as a dominant element, complete with layered keyboard textures and atmospheric laden guitar flourishes, more ballad-oriented creations as well as ambient-tinged atmospheric creations is a part of the totality too. One of the compositions takes something of a left turn into territories with a bit more of a progressive electronic touch to it, while on the other hand we also get a couple of songs here with a beefier, more hard rock oriented touch. In between all of this we also get the occasional nod in the direction of artists such as The Beatles and Genesis, albeit mostly in a more subtle manner.

Mix and production have been very particular on just about all the Accept albums I have covered over the years, to the point of being a divisive feature. While this aspect of the album experience remains in place this time around as well, on this occasion the end result is much more accessible. The mix and production values give this whole album a majestic, grandiose and dramatic dimension, with the word theatrical coming to mind pretty often when listening through this production. I also note that Hisao has improved as a vocalist, and that the guitar is better sounding this time around than on previous occasions.

Conclusion.
The artist formerly known as Accept (JP) have delivered his possibly finest album so far with "Apogee", and while the building blocks and tendencies remain pretty similar to what has been the case also on previous occasions the more accessible mix and production in particular will make this album one that should have a broader general appeal. Fans of atmospheric laden neo-progressive rock strikes me as a key audience for this album, and then in particular those who tend to favor music that comes with a dramatic and theatrical big sound.